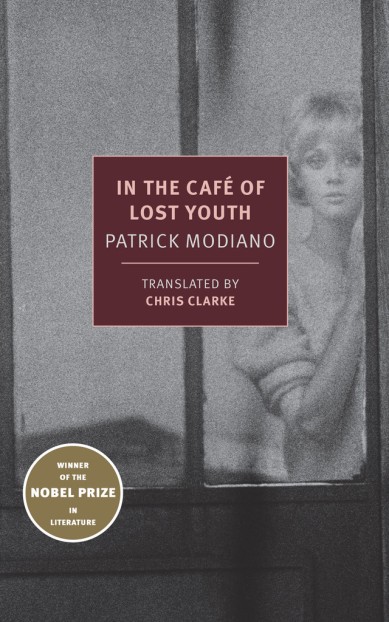 In The Café Of Lost Youth by Patrick Modiano

When one of my favorite regulars at the Bookshop recently asked me what I’d been reading, the only thing I could think to say was, “Mostly novels about unhappy women being mysterious in Paris.” What a genre! It turns out that there are all sorts of enjoyable books on the subject, and for a week I was stuck on them. Something about the notion of disappearing into a city full of history and art, seedy cafes and “neutral zones,” clearly appeals to morose young women struck by wanderlust. Louki and Grace (from Unbecoming, the next book I will review) feel it as they try to camouflage themselves within the scenery in their novels. And I felt it too, reading from my unseasonably damp corner of New England.

In The Café Of Lost Youth is the first Modiano novel I’ve read, though he blipped onto my radar with his Nobel Prize win in 2014. It’s a short little book, just over a hundred pages, but reading it made me feel like I’ve lived in Paris for years. The novel is broken into four sections, each narrated by a different character, but it all revolves around Louki, “the waiflike figure” who draws their interest like planets circling a sun. Even the section narrated by Louki makes her only more attractively unfathomable. Aside from Louki, In The Café Of Lost Youth also considers the places where the atmosphere broadcasts exactly what part of Paris you are in versus the places where time has no dominion.

“There was a series of transitional zones in Paris, no man’s lands where we were on the border of everything else, in transit, or even held suspended. Within, we benefitted from a certain kind of immunity. I might have called them free zones, but neutral zones was more precise.” (p 83)

These neutral zones could exist anywhere, and it’s easy to see their appeal to people looking to hide out from their pasts. Louki, who makes a habit of disappearing from whatever family life begins to form around her, sort of becomes the patron saint of these places. Roland, who struggles to put his thoughts about these spaces into words, is powerfully moved by their potential, struck by their propensity for the “eternal return”. On the other hand, certain scenes near the Moulin Rouge; on certain hilly streets; or in the cafe where we meet our characters for the first time, are so vivid they could never be neutral for a moment.

I particularly like the first narrator’s description of the Conde; he a shy student entranced by the regulars:

“Along with Le Bouquet and La Pergola, it was one of the cafes in the neighborhood that closed the latest, and the one with the strangest clientele. I often ask myself now that time has passed, if it wasn’t her presence alone that gave this place and these people their strangeness, as if she had impregnated them all with her scent.” (p 7)

I’ve no clue if the characters make the settings in this book, or if the settings amplify the characters, but the sense of place is a fine reflection of both. While the writing occasionally becomes sorrowful, hung up on the unattainable past, Modiano finds the perfect location for every scene and redeems the tone with astonishing details.

After reading, I learned that some of the characters were real people among the political and bohemian set in 1950s Paris. Ed van der Elsken’s photos are a great illustration of the novel’s atmosphere and characters. Not knowing the first thing about the theoretical groups of this time period didn’t stop me from enjoying the abstract conversations and tangled gossip at Condé. Being a chronic cafe-dweller myself, I relished every scene that took place at regulars’ tables or in garish late night public spaces. The novel, especially the first narrator’s chapter, is immensely satisfying for the eavesdropper in all of us.

My one major gripe with In The Café Of Lost Youth has to do with its conclusion. Without spoiling the ending, I’ll just say that there are a few events which seem to befall beguiling, unpredictable young women in novels written by men. It’s gotten to the point that every time a character such as Louki – ethereal, charming, secretive – gets introduced into a male narrator’s story, I hold my breath and hope she won’t be just another chick who does something drastic, teaching dudes that they can never really know a person. Modiano is a tremendous writer and handled Louki’s character very well, I thought, but he does give her one of the plot twists I was dreading just at the end of the story. Does this make since given her character? Sure. But I still think that enigmatic women deserve a few more options at the end of their stories.

In perusing his Wikipedia page, I’ve learned that the majority of Modiano’s novels deal with the reigning themes I detected in The Cafe. Questioning identity, the puzzling permanence of time, the unknowable nature of people, all in a French accent. (A note: Modiano’s Wikipedia page is actually quite interesting to read.) If all of his books send me into a similar stupor of introspective moodiness, I might wait a while before picking up another one. But I felt right at home among the cafe tables and the midnight streets, so the next time I want a mental trip to vintage Paris, I know where to look.

One thought on “Unhappy Women Being Mysterious In Paris Part I : In The Café Of Lost Youth”