Age range recommendation: 12 and up

This YA novel by Catherine Howe (author of The Physick Book Of Deliverance Dane) is about quite a few subjects I like. Catholic school! Teenage hysteria! Mysteries! Witchcraft! Friendship! Katherine Howe took some fairly common subjects in YA and made them original through some plausible plot twists and good historical detail.

The story in Conversion unfolds in two different timelines. Most prominently, in modern times, are the events surrounding St. Joan’s Academy, where teenage girls are falling ill with no rhyme or reason. It starts out in Colleen’s homeroom, where the popular and (usually) utterly poised Clara suddenly dissolves into violent twitches and tics. Soon enough, Clara’s friends and then dozens of other girls fall victim to the strange disease which seems to defy all classification and remedy. A media storm and internal drama won’t let Colleen’s already stressful last year of high school continue on as usual, but she’s a focused and driven main character who tries not to buy into the sensationalism all around her. Until one of her own best friends gets sick. While the drama unfolds around her, Colleen is reading The Crucible for extra credit, assigned to her by the mysterious substitute teacher. She starts to see parallels between historical Salem and the events unfolding on the same land right now. Could the afflicted girls be faking it, or truly suffering from something outside their control? 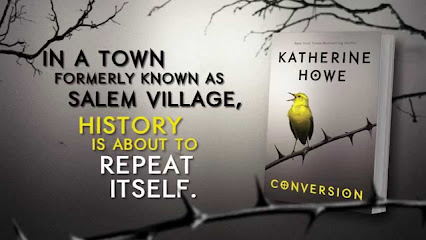 Then there are “interlude” chapters throughout Colleen’s narrative, which take us back to 17th century Salem Village. Same place, different time, and an utterly dreadful chapter in American history. The interludes are told from Anne Putnam’s point of view: one of the girls who was instrumental in accusing the condemned women and men. In the aftermath of the infamous trials, after she’s had years to reflect on her actions, Anne Putnam wants to confess that their accusations were false. (This really happened, by the way.) She describes the events leading up to the girls’ testimonies: their lives at home, how the younger girls first came to act possessed, and the encouragements heaped upon them by devout authority figures. Anne wants to be understood, and maybe along the way she can come to understand what inspired her friends and herself to ruin so many lives. In the past and in the present, nobody has clear motives, and even the best intentions can lead to serious harm.

Being from Massachusetts myself, I already knew quite a lot about the witchcraft hysteria. But Howe describes it vividly – without unnecessary embellishment – so that even readers who are less familiar with the subject will become immersed in the action quickly. Katherine Howe is a lecturer in American Studies at Cornell, so I trusted that her portrayal of events would be laced with careful research, even if creative liberties changed the plot a bit. She actually drew inspiration from the mystery sickness in Le Roy, NY (2012), deciding to set it near Salem to show similarities to historical events. This was a neat touch, but the book is easily enjoyed even without that bonus fact. The Salem history is much more important. I really liked how Colleen’s teacher encouraged her to look at a character who was written out of Arthur Miller’s play, in order to get a clearer picture of the social and historical context of very real events. Enigmatic teachers are always a good addition to YA set in schools, and Ms. Slater is no exception.

It takes some creepy anonymous text messages and one nosy little brother to get Colleen really immersed in the similarities between her classmates’ behaviors and the famous trials, but soon enough she’s drawing conclusions that range from almost too easy (they must be faking) to utterly far-fetched (is one girl causing these afflictions with her mind?). Different theories seem likely as the disorder weaves its way through the girls at school, and I was never quite sure if the story would follow through with the occultish vibes which start to build. The uncertainty was a good thing, though. No one knows what’s going on; not the teachers, not the girls, not their parents, not the media. And it’s in the ways that people deal with potential disaster that we see how easily fear can take hold of an entire community.

The plot of Conversion was interesting, and the mystery took a suitably windy course to the (slightly anti-climactic) conclusion, but my favorite aspect of the book was definitely the main characters. Colleen and her friends aren’t saints or detectives, they just want to get through their last year of high school and find some certainty in their futures. Colleen is agonizing about college next year. Anjali’s intense relationships with both her boyfriend and her close friends are shaken when she gets sick. Deena is a beacon of sanity in tough times, but she has her own future to think about while everyone else loses touch with what matters. And Emma, Colleen’s oldest friend, is bothered by something secret and painful that Colleen can’t quite figure out. The other girls at school aren’t developed nearly as well as these four. I do wish Clara’s popularity had been explained a little better, and that punk-y “The Other Jennifer” had become a major character rather than just hovering in the periphery. There’s a bit of romance (surprisingly likeable romance!!), and some people aren’t nearly what they seem, but all these extra attachments are secondary to Colleen, Anjali, Deena, and Emma. Their worlds revolve around each other. Or so Colleen would like to think.

In books about school scandals, it’s easy to see how adults could be simple stereotypes filling in required roles. Some of the adults are rather shallow, but the teachers especially are sympathetic portrayals of people struggling to make the right decision when they’re in way over their heads. I love it when children’s and YA books make it clear that grown-ups are just as confused as kids are, only they’re often responsible for so much more than just themselves. The calamity at St. Joan’s brings out noble qualities in some characters, selfish ones in others, and the stakes just keep getting higher. Kind of like what happened in Salem, eh? I started reading Conversion because the plot caught my attention, but it was the characters who kept me reading.

I recommend Conversion to both teenaged and adult readers, especially those who like private school stories and small town drama. I really liked the historical interludes, but the modern story is compelling enough on its own that you don’t need a previous interest in the witch trials to read the book. Conversion takes a tense and sympathetic look at stressed-out teenagers in a weird situation without ever turning into an out-of-control melodrama. No matter if they’re lairs, cursed, or sick: you’ll want to stick with these girls ’til the end to figure out what’s going on.

Some books to read if you liked Conversion:

The Physick Book of Deliverance Dane by Katherine Howe

The Fever by Megan Abbott

A Break With Charity by Ann Rinaldi

The Witch Of Blackbird Pond by Elizabeth George Speare

One thought on “Book Review: Conversion by Katherine Howe”